A few months ago, before the screening of the Life Outside the Box Puppetry Film in Canada and Dungarvan Cinema our IWA group was reflecting on where to show the short film next.
One of the suggestions from Margaret Ann Foley was to ask RTE (our national broadcaster) if they would like to show it on the People's Angelus ...

The one minute daily reflective Angelus broadcast on RTÉ One is one of Ireland's longest-running programmes, having been aired daily at 6.00pm since the inception of RTÉ television in 1962.

Ireland has changed enormously over that time and the nature of the broadcasts has changed with it. They are now changing again. Since October 2015 New commissioned films create a reflective space for all in the peak-time schedule… In addition to these commissioned professional films, RTÉ One has designated one slot per week, on Fridays at 6pm, as The People’s Angelus slot
More about the People's Angelus

And you know what.
I contacted RTE's Roger Childs, Senior Production Executive & Genre Head of Religious Programmes RTE. I emailed a little bit of information, and the film. I received a Very Enthusiastic response that same day.

A few months have passed, with several edits made and contracts and permission signed. And now...


THIS FRIDAY 2ND JUNE, 6 PM
OUR LIFE OUTSIDE THE BOX
one minute version
WILL MAKE IT ONTO
NATIONAL TELEVISION!

So please tune in.

It will be included in a regular rota of People's Angelus submissions
every Friday, over the coming months.


Thank you all who were involved in this project.
Members and Staff at the IWA.
Alan O'Callaghan of The Bootleg studios.
Roger Childs at RTE.
And all who supported us along the way.

* I have also been asked to talk about the project at the upcoming The Broken Puppet:  A Symposium on Puppetry, Disability, and Health. At UCC in August

Posted by Puppet Reporter at 11:41

Email ThisBlogThis!Share to TwitterShare to FacebookShare to Pinterest
Labels: and Health, disability, film, People's Angelus, The Broken Puppet: A Symposium on Puppetry, TV 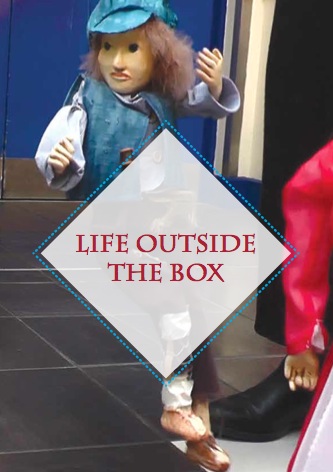